Turning Up the Volume in Public

“The acme of overwrought spaces for public fun has to be the Young Architects Program (YAP) organized by MoMA PS1 in Queens. Now in its 13th year, the program offers young architects a chance to unleash their imaginations in a competition to come up with temporary designs for the museum’s walled-in play yard. The winning design needs to offer shade, seating and some sort of water feature, all the while maintaining environmental “relevance.” It is that last which makes the competition a bellwether of how we currently think about and engage with public space.

This summer, the six-year-old New York architecture firm HWKN won the YAP competition with “Wendy,” a 46-foot-tall, many-pointed blue star caged in heavy scaffolding. Shade is provided inside the star on platforms accessible via steep stairs—stairs that after opening night were deemed too unsafe for use because the industrial fans suspended inside and rigged with misters make the interiors not only loud and wet but also slippery. Seating of a sort is fashioned from swim-noodle foam wrapped around the lower scaffold pipes.

Unassailably relevant, however, is the smog-eating fabric with which the star is made.

The architects worked with Pureti, a green-tech manufacturer (and winner of a 2011 “What’s New” award from Popular Science), to develop a spray version of a titanium nano particle that, when activated by sunlight, oxidizes airborne particulates and converts them into water vapor and trace amounts of carbon dioxide. A powder form for concrete is already in use at self-cleaning sidewalks in Malmo, Sweden, and the Jubilee Church in Rome. The TiO2 mixture was sprayed on 26,000 feet of blue fabric, and HWKN principal Matthias Hollwich figures that by Sept. 8, when it’s disassembled, “Wendy” will have digested the smog coughed up by the equivalent of 260 cars. “Wendy” looks spectacular from the elevated subways leaving Queens.” 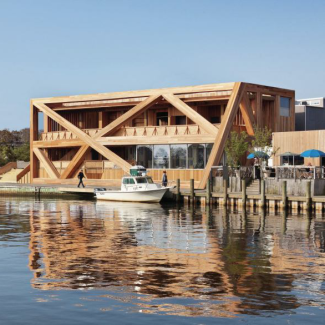